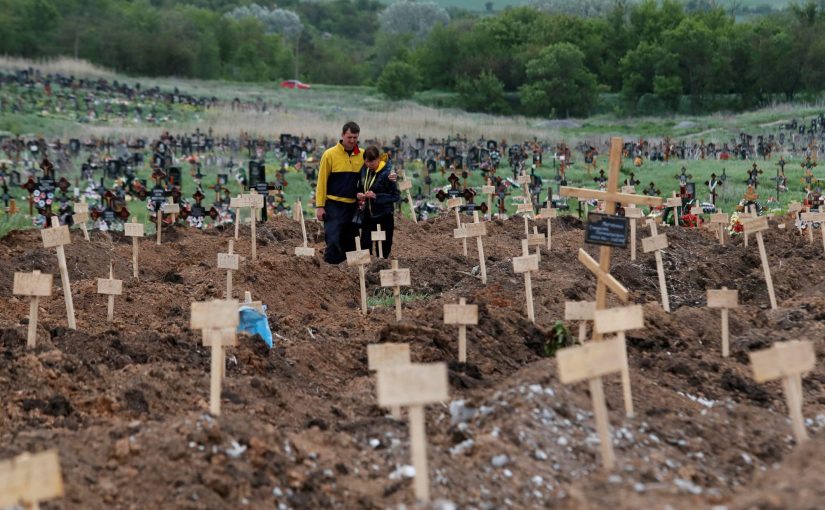 Tears……………………..! Have you seen the pictures of mothers and wives in the Ukraine shedding tears for sons, fathers, husbands and children. It affects me with sadness, when I see those pictures on our screens of the aggressive cruelty that this war brings. The senselessness of the whole events. Why this was necessary and for what reason? Total ‘scorched earth’ blasting tactics by the Russians. Insane! It is beyond me.

Of course we hear what Putin is telling his people how the Russians are saving the Ukrainians from a much and terrible (Western Culture) danger. We are the Saviours, he tells his people. But………. from our side we see nothing but his denials, aggression and anger and the innocents deaths and destruction and many tears. Hell has come to the Ukraine!

After tracking over 100 days of fighting, I guess maybe also for others, I have gone from an eager view of war news, (sinking of the Moskva war ship – April 14, 2022) hoping the Ukrainians would teach the Russians a lesson and win the war, to a more mundane noting of war news progress each day. There have been times when the tanks pulled back from the capital Kyiv that I was hoping for a truce but with the flattening of Mariupol and the battle for the Steel Plant factory to the fighting in the Donbas region now in full swing, the full force of the Russian military superiority in numbers can now be seen to be gaining the upper hand in eastern Ukraine.

Pictures of tearful people mourning the death of loved ones and the destruction of their homes and neighbourhoods are hard to watch. The pictures and videos are plenty and extremely moving. Funeral services and the discovery of mass graves ran a chill over my body giving flash backs to the Yugoslavian (Serbian, Croatian, Bosnian) conflict of the 1990s where we heard stories of children asking their mothers: ‘Where is my daddy?’ and receiving the soft reply: ‘He has just gone into the woods for a while’. The song by Kurt Bestor “The prayer of the children” reflects the anguish of war on children but also on the whole of the afflicted communities. (listen for this sung by the Ambassadors Christian Male Chorus)

Putin says, if the US and others (NATO allies) supply Ukraine with more deadly weapons with longer range, it will force him also to use his more powerful deadly weapons with longer range. Already he is moving multiple rocket launchers thousands of miles across Siberia to boost its war effort. The Russian BM-27 Uragans can fire 16 rockets in 20 seconded up to 20 miles distances. And there is access to other terrible weapons! I sometimes fear the war is escalating into a large European conflict and I fear for its potential bad outcomes for our EU immigration home-lands and our extended families living there. Not only that, but what about the Ukrainian (food) grain harvests which feeds 15% or more of the world’s population especially those of African counties where famines are already taken hold in Somalia and other near areas. What is the use of winning when the spoils of war are death, destruction and blowing up every building in the conquered cities and towns leveling the territory gained to a flat contaminated disruptive wounded earth. The ‘scorched earth’ war tactics practiced by Russia on the Syrian city of Aleppo. Not only have the communities and its structures disappeared and disintegrated but also the natural environment has suffered with large bomb caters and unexploded missiles and rockets in roads, streets and fields with its chemicals and fire damaging pollutions of air and waterworks, streams and nesting habits of wild creatures have been disturbed and dislodged. The hearts and minds of those affected citizen who lived in and formed the targeted communities are in despair (imagine losing your home and possessions!) and many have had to flee to other more safe areas. What has Putin gained? Certainly no thanks! He has turned the world against himself. It is madness. The Intelligencer (March 23, 2022) states: ‘Putin has brought HELL to Mariupol!’ yes, and to all of the Ukraine!

Even now, as the war continues, for me it has become a more, ‘what can we do?’ and dare I say it? a normal reality check-in of our lives! It is a human nature’s acceptability of ………. Well, it is what it is! and that bothers me! Oh, I am not casual about these events or their dangerous consequences, but have almost come to accept the (daily) reality (tired) of it all. Selective support for donations for the Ukrainian people is something everyone can do!

Still a prayer for peace and deep sympathy and empathy for the people of Ukraine is my daily wish and practice. May God give those who lead wisdom to bring it all to a just close. May the Holy Spirit of Pentecost blow through the corridors of the world’s power groups and parliaments. The Russians need to stand down, face reality and tell the world ‘it is over!’ Putin needs to come to the peace table. PRAY FOR PEACE IN UKRAINE but also in other parts of the world!

May we show your compassion, Lord, make me an instrument of your peace.

I cried to the Lord in my trouble, and He answered me. 2 O Lord, save me from lying lips and a false tongue. 3 What will be given to you and what more will be done to you, you false tongue? 4 He will punish you with sharp arrows of the soldier, and with the hot fire of the broom tree.

5 It is bad for me, for I travel in Meshech * and live among the tents of Kedar! 6 I have lived too long with those who hate peace. 7 I am for peace. But when I speak, they are for war.

Note: * sometimes identified in the Bible as people from Japheth’s descendants living in Russian geographic areas.

Above picture from the Atlantic Council report May 24, 2022 entitled: Putin’s Mariupol Massacre is one of the 21st century’s worst war crimes.

Retired; Octogenarian; Opa and husband; interested in celebrating/contributing to the blessings we have as Christians in Canada's fair land. View all posts by Opa JanS